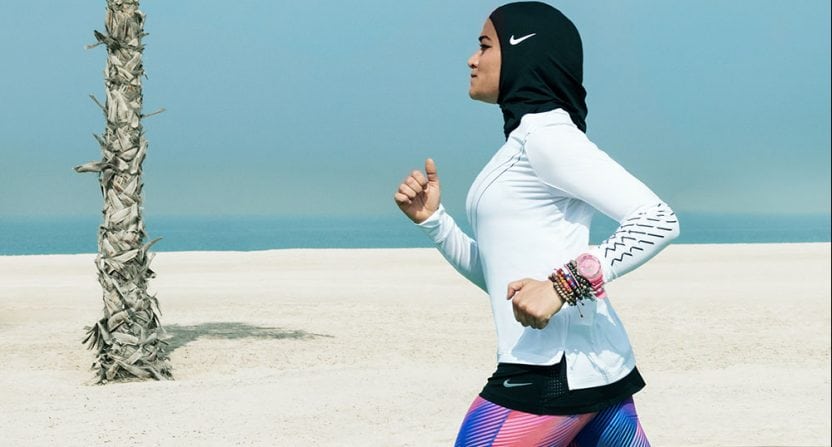 Nike Is Showing Us Why Fashion Bonds People Together With Their Hijab Made For Muslim Athletes!

Creating a hijab made for Muslim athletes may seem like a money move done by Nike especially in the current political climate. Beyond the money it may or may not involve, we still have to salute to Nike once again for their perspective and their game changer attitude when it comes to fashion and sports.

Read Also: Stay Warm And Fly During Wintertime With Cake And Carats

With Trump’s controversial presidency and his infamous Muslim Ban, the Quebec’s shooting of a Mosquee and the overall persecution of Muslim people around the world; Muslims finally can catch a little break. Fashion has this power to unite people and Nike made the first step towards acknowledging Muslims with their new collection.

A Fashion Designer On A Mission

Yesterday they unveiled their first hijab made for Muslim athletes and the world went crazy. A reasonable question to ask would be : how come a big corporation and typically American company like Nike goes the extra mile and create a collection for the quote on quote enemy?

Even though it seems like a small achievement, I think it opens more doors for the world to accept and embrace Muslim people. Every discriminated group knows about this one rule: the more and more you have a positive representation in the mainstream’s world and the more they will accept you.

Here is a close look at Nike’s new hijab made for Muslim athletes coming in 2018.

Sneak Peak Of Nike’s New Hijab
The hijab has the same high performance standards as their other lines of products. It will allow safety and functionality for any athlete using it which is great. The design is quite simple and of course, as you already know, they had to implement the “swoosh” sign to it but we’ll give them a pass for that.

Will this alone cure islamophobia? I don’t think so but this is a first step that we can’t take for granted.

What are your thoughts about this bold move done by Nike? Should more designers take this initiative or it’s not enough? Let us know in the comment section and let’s start a conversation about that!

5 Sneaker Concepts You Wish Were Real (For Real)

The Sneaker Report: 5 Shoes Every Sneakerhead Should Buy

The Sneaker Report : Kick Off The New Year The Fly Way With These 5 Winter Sneakers

The Nike Air Max Bus : A Museum To Rediscover The Air Max Like Never Before!

The Sneaker Report : 5 Sneaker Drops You Need To Grab Before The Snow Comes

Nike Supports Members Of The LGBT Community With A New Release

The Book Club : 3 Classic Books To Be The Best Version Of Yourself For 2017