Marie Luce Béland has an interesting story we rarely hear in the music business. She came out the gate with a hit in 2006 when she was only 19 and while people might think that she would’ve went the teen star route she actually did the opposite; she went missing!

Read More: This Dating App Founder Is Trying To Save Your Dating Life, One Match At A Time

Indeed with the release of ”Pleine Lune” in 2006, Marie Luce Béland, her energy, style and melodies were an undeniable part of the ecosystem in the music scene at the time.

Sometimes as bad as you want something you then realize that might not be enjoying it the way you thought you would.

Instead of pushing it to the extreme like we see some artists do, Marie simply decided to stop and focus on things that brought her joy instead.

Things like teaching young delinquents the art of expression, returning to school to perfect her craft or simply enjoying life with her significant other.

Never in a million years she would of thought that this new found balance would suddenly vanish when her and her partner decided to separate while having a young child.

Following her gut she went somewhere no one who once had a hit single on radio would go: La Voix.

Following the success of her appearance, the Trifluvienne artist released her single called ”Roméo” which is a great way to scream loud and clear : ”I’m back and i’m unapologetic about it”.

Roméo is already number 53 in the top 100 only one month after it came out. We’re looking forward to Marie-Luce Béland has in store and so should you! 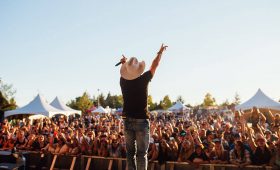 High Klassified’s New Ep Is What Your Ears Been Missing

Take Your Pallet To Roma Inside This New Montreal Italian Grocery